Many embedded systems have no screens (as in the case of an Arduino) or only small screens (a wrist-watch for example). You already saw in the last post, how you can read data from screen-less devices by listening on an UART with JavaScript.

Now, let’s look at the opposite case: Writing bytes into a device. This becomes interesting for device configuration, feeding displays, adjusting light or parameters of a robot.

As in the previous post, we use the serial port with JavaScript, and transmit data to an Arduino. Before bytes can be transmitted, we must capture them, for example from a user.

Here is an example for writing bytes over UART. Imagine you have a table football in your office. And, you want others allow to follow score on a 7 segment display. 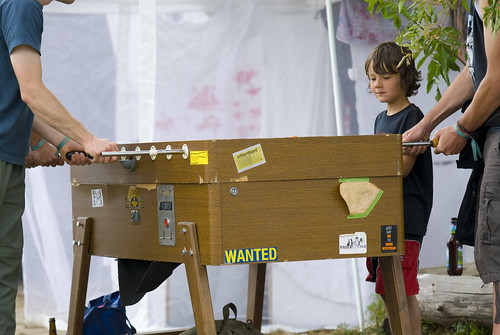 So, for this project you need to setup several things:

A fundamental concept behind moving bytes in NodeJS are streams. With streams, you can observe and manipulate the flow of data over time. A good examples for streams are HTTP requests and responses. See the NodeJS HTTP API docs for details.

Besides data in networks or databases, streams are nice to deal with user input too. Input from a user can be captured with a simple writable stream:

A simple test shows how this works:

The writeable stream handles “write” and “end” events from the standard input. This connection is made by piping standard input to the writable stream. You could also pipe the output of a file into the write stream, e.g. with:

So far about the basics of a writeable stream. @substack has a great talk about details and types of streams.

As previously with the read command, you can simply write to the serial port on write events. When you include the serial port in the previous example, the code becomes:

Now, you could connect to some periphery and send data with 9600 baud. Let’s explore that. First we must again prepare the Arduino.

On the Arduino, we now need to examine its UART whether there is data in the receive buffer. If so, we parse the data and the do something, e.g. activating a display.

What follows is some simple Arduino code to read two numbers separated by a character:

An nice 7 segment display to see some action is this product from Sparkfun. Some examples illustrate how to control the numbers on the screen.

The result? Now, you can write the scores of a table football match or any other game to an external display. We are going to learn soon how to attach web services and interfaces to hardware. Then streams and NodeJS can start to show its real benefits. 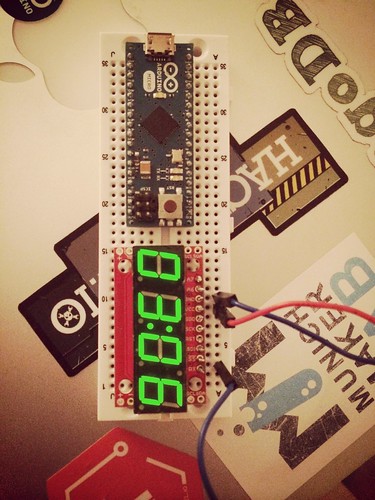 Note: This post is the first post of a new series about JavaScript for embedded devices. This will be the topic of my new book. Any feedback, suggestions and criticism is highly appreciated.